Sometimes, it’s the scenes you see every day that give you an easy opening to find beautiful art that’s perfect for any occasion. This has made nature a popular choice when it comes to subjects in art. In this case, the art in question is night sky art that gives viewers a glimpse through the eyes of the artist.

This type of art is ideal to decorate your home. Hang a painting that matches the color scheme of the room and create the perfect accent. You have to make sure to consider the dos and don’ts of decorating with art when choosing a piece. 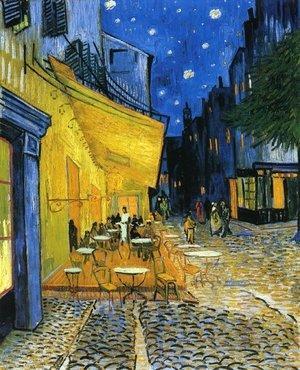 Vincent van Gogh was well-known for his use of bright colors and a Post-Impressionism technique. He displayed a brilliant use of warm yellows against a cool night sky. This creates clear focal points of the shops while juxtaposing them against the tranquil atmosphere of the night. 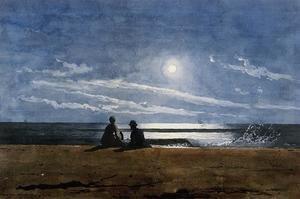 Moonlight, painted by Winslow Homer, is a calm painting featuring two human figures on the beach, taking in the moonlight. The focal point of the painting is truly the bright moon that hangs over the sea rather than the figures relaxing on the beach. Small details such as crashing waves on the shore and wispy clouds pull the piece together.

Night A Port In the Moonlight, Claude-Joseph Vernet 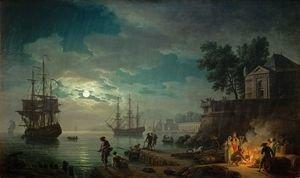 Claude-Joseph Vernet creates a much busier scene in his painting Night A Port In the Moonlight. Under the glowing moon, viewers can see people working on the docks, ships floating past, and even a crowd on the beach enjoying a bonfire. This painting is particularly interesting because it represents one piece of a four-part series focusing on different times of the day. 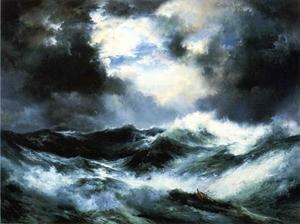 Thomas Moran’s Moonlit Shipwreck at Sea took a different approach to displaying the night sky in a painting. Rather than opting for a playful and lively night under the stars or tranquil moonlight, he chose a rather chaotic scene. The foam tips of the waves and the tufts of clouds in the sky offer a great contrast to the nighttime sky and the dark sea. 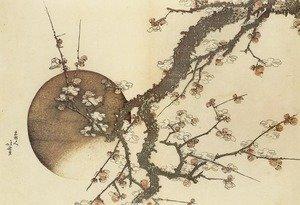 Unfortunately, Eastern art doesn’t always get the same attention as its European peers. However, it would be a shame to leave out Plum Blossom and the Moon when discussing paintings inspired by the night sky. Hokusai uses a simple color palette and a detail-oriented hand to recreate the scene for viewers. 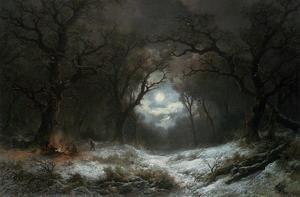 Stepping back into a more tranquil world is A Moonlit Winter Escape by Remigius Adriannus van Haanen. The painting doesn’t feature any prominent human figures and simply shows the moon illuminating a winter-laden forest. It’s a piece that showcases the skill of the artist in capturing landscapes. 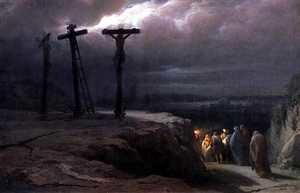 Night at Golgotha was a painting done by the Russian artist Vasili Vasilyevich Vereshchagin. The painting blended two common muses for artists over the centuries: nature and religion. While the night sky is used perfectly to accent the figures in this painting, the focus is obviously on the religious undertones of the site of Christ’s crucifixion. 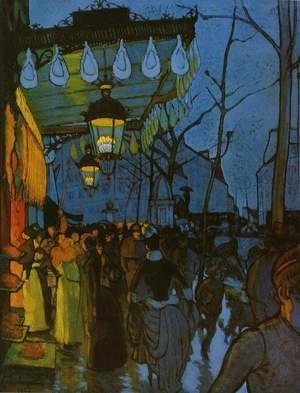 Louis Anquetin was a truly talented artist that was inspired by both Post-Impressionism and modern art. His piece Avenue de Clichy, Five is particularly interesting for its use of strong colors and bold lines. This gives the final draft of the oil painting an appearance similar to that of a stained glass window. 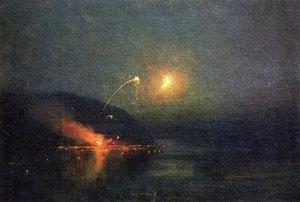 James Henry Moser paired the night sky with one of the most festive inventions out there: fireworks. Today, these lights in the sky are used for nighttime celebrations of everything, from major holidays to patriotism and sometimes just for fun. In this painting, the artist uses the lights from the fireworks to combat a night sky that doesn’t hang with a full moon. 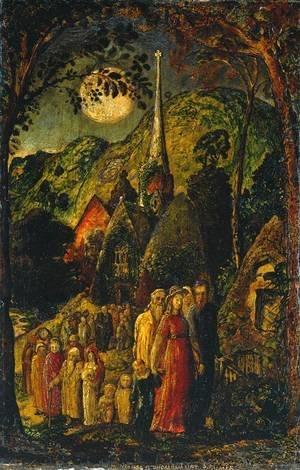 Samuel Palmer painted his masterpiece Coming from Evening Church in 1830, and it emanates a classic, highly-detailed Romanticism influence. The painting is highly lauded for its level of detail and care. Palmer painted it during his time living in Shoreham which he described as a “rural paradise.” By this definition, it’s likely to believe that this well-known piece was born from something that the community did on a regular basis: attend church. 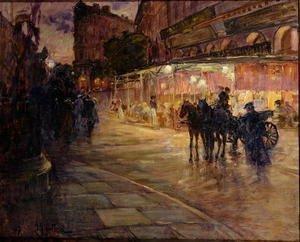 Instead of focusing purely on the landscape, Rigotard chose to take a look at what the night sky looks down upon in his painting Paris Street Scene by Night. In painstaking detail, he shows the liveliness of a Parisian street rather than focusing on rural iconography.

Nature has always been one of art’s biggest muses since the beginning of time. The man on the moon continues to smile down not only on these paintings but ones missed and ones that have yet to be released. If you’re interested in a little extra explanation, there’s a lot to learn and find out about this subgenre.